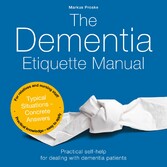 “Is it time now?” – What to do when the first anomalies occur

“Is it time now?” – this question is one of the most frequently asked by relatives. A relative, a friend or an acquaintance has shown “abnormalities”. Now the great fear stands in the room: Is it time now? Is that Alzheimer’s? Does he have ­dementia now?

So much has been published about dementia in recent years that even ­experts are unable to study the publications. However, there are hardly any practical instructions like the dementia etiquette you are holding in your hands. This may be due to the general uncertainty about the definition and course of the disease among the experts themselves. If we know so little, the tenor is, how can we give practical tips?

I dare to do this because I deal with dementia sufferers on a daily basis and have done so for many years. Nevertheless, I don’t want to understand my proposals for solutions as being valid on their own. Dementia is individual and therefore the approaches are diverse. However, certain rules have emerged which I would like to recommend to you.

Let’s say your mother’s been getting a little weird lately. She was thrifty throughout her life, every penny, every cent was turned upside down several times before it was spent. Now your mother seems to have lost all connection to money and is spending her savings on unnecessary things without hesitation. Even if your grandchildren might benefit from it, they are not at all comfortable with it. Especially since you have read that people with dementia often become stingy or show the blatant opposite. Could it be that the changed behavior of your previously so thrifty mother indicates the onset of dementia?

First keep calm and exclude all other causes before using the term “dementia”.

Let us start with what is written: “People with dementia often become stingy or show the blatant opposite.” This apparent contradiction shows the individual course of the disease. The fact that someone suddenly throws money out of the window or remains sitting on the purse is by no means an indication of dementia. Even in the case described above, it may simply be that your mother has a problem with counting. I therefore advise you to observe them: When shopping, does she only pay with banknotes and put the change away without counting it up? Does she always choose an extra-large bill to be sure that the cashier cannot react with the words “That’s not enough”? What does she do with the small change, the value of which she is no longer able to assess? Maybe that’s why she’s giving it away?

If someone is no longer able to count, this can be an indication of a ­cognitive change in the brain. But before the sentence is passed as “dementia,” I would first go with my mother to the eye doctor. Perhaps there is only a restriction of vision, which leads to the fact that it cannot recognize the numbers on the coins and notes correctly any longer.

It also determines how healthy a person really is, or which diseases he or she already has. Only when secondary dementia can be excluded do further tests show whether primary dementia is present. Even here, the doctors will be cautious in their testimony. It has been found that dissected brains are generally no different from healthy and dementia elderly people.

“What have we done wrong?” – Confusion after a hospital stay

Actually, you’re satisfied with the way things are going: Although your father died recently, your mother still lives at home and takes care of herself. “As best she can,” you say to friends and acquaintances who ask about it. “Let’s knock on wood so it goes on like this for as long as possible.”

One day your mother complains of pain. What kind of pains they are, she cannot properly express. “It just hurts,” she says. The general practitioner also has no idea what to do and does what doctors do in such situations: he advises that your mother be admitted to hospital for a few days. He’ll know what he’s doing, think about it, a few days in the hospital to check her out will do her good.

Unfortunately, that’s not the case. When your mother comes back from the hospital, you hardly recognize her. She’s completely changed and clearly confused. She suddenly defecates her pants and no longer recognizes her family members.

Of course, you’re horrified. What happened? you ask yourself, is mother now also suffering from dementia? The very next day, you’ll see your family doctor. There you have to wait with your mother the usual time until it is your turn. The family doctor asks his assistant Mrs. Maier to subject your mother to a “dementia test” the so-called clock test.

This test is very popular with general practitioners because it is easy to perform. The results are quick – but one has to be cautious. Mrs. Maier hands the mother a sheet of paper with a circle drawn on it and asks her to depict the time at 10:20 a.m. with the help of painted hands and to add the missing numbers. Optionally the sheet of paper is completely empty, then the clock itself must also be painted. Her mother reacts confused, she does not understand what she should do. For the family doctor, the diagnosis is clear: “I’m sorry to have to tell you this, but your mother is actually suffering from dementia.”

If confusion occurs after a stay in hospital, wait and see. Often it is a transit syndrome, which fades away after some time again. Accompany your relatives to the clinic next time. Most hospitals offer a “Rooming in” (extra bed). In many cases such a delir can be prevented.

The state of confusion can disappear again if you slowly and benevolently lead your mother back into everyday life at home.

A visit to the doctor is usually very stressful for old people. The waiting, the tension, a test situation – and on top of that, on such a day people often don’t drink enough. Such a thing can quickly lead to a falsification of any test results.

A so-called delir – also called “transit syndrome” – is a short-term cognitive change in the elderly that often occurs during hospital stays. You can imagine it that way: Your mother knows her way around at home, but in hospital she feels alienated and helpless. In addition, there is the influence of drugs such as tranquilizers or perhaps even an anesthetic. The atmosphere in a hospital is often marked by stress and thus also contributes to delirium.

A delir occurs in about 20 percent of hospital patients, in older people it is even 50 percent. As a rule, those affected are confused, anxious, highly nervous and/or hallucinate. The sleep-wake rhythm can also be disturbed.

“You used to love reading the paper!” – Detect hidden signals

All his life, your father read the paper. When he retired, the reading at the breakfast table was celebrated. Now the newspaper often lies around half-read or not looked at it at all. You hear yourself say: “Why don’t you read the paper anymore? You’ve always liked that!” The same applies to reading books or listening to radio broadcasts.

Pay attention to hidden signals – but also to your own reaction. Don’t exaggerate!

There’s a good chance your father’s tired, overworked, or sick. But it is also possible that he gradually loses the ability to read. Or to grasp the meaning of read words. Thus, the abandoned newspaper reading could be an indication of the onset of dementia. So, if you notice that the newspaper is unread, see how your father reacts when you withhold the paper from him for a few days. If he doesn’t react, you can cancel the newspaper. If he misses his paper, he’ll tell you. Then you know that the newspaper is still of value to him. The same principle applies to books. When it comes to the radio, it may be adding to his sensory overload.

Dementia sufferers are masters at hiding performance deficits. They’re doing everything in their power to cover up the loss. There’s shame and guilt behind it. Imagine someone coming daily and bringing you an object completely unknown to you with the words: “Here’s your newspaper.” They no longer know what a newspaper is and for what it should be good. Any one of us would want to hide that for now.

“How do I tell the others?” – How and when to talk about the diagnosis

Your father was diagnosed with Alzheimer’s dementia. Now ask yourself what you should tell him and the rest of your family and circle of friends. It is important to weigh here: Actually, everyone has a right to know what’s wrong with them. On the other hand, his welfare must be placed above this right. View the situation from the point of view of the person...