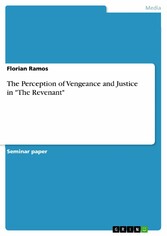 The Perception of Vengeance and Justice in 'The Revenant'

The Perception of Vengeance and Justice in 'The Revenant'

Seminar paper from the year 2017 in the subject Film Science, grade: 3.0, Pädagogische Hochschule Vorarlberg, language: English, abstract: 'The Revenant', directed by Alejandro G. Iñárritu, indicates some essential features of the individualist movement. In this research paper, the focus will be selected upon the perception of justice and vengeance based on the perspectives of the characters and the environmental tribune of the film setting. By involving the above-mentioned aspects, the main objective is to provide a meaningful portrait of 'The Revenant' which especially emphasizes its relatability. By adding some philosophically and psychologically relevant background information, the global structure will be strengthened. Furthermore, the involvement of those elements essentially support to prove whether the perception of vengeance and justice shift by the end of the movie. The movie also features some philosophical declarations concerning the embodiment and expression of certain structures. It not only underlines the importance of family, but also shows some key characteristics of modern society. From the perspective of John Fitzgerald, the antagonist in the film, the attitude toward justice varies essentially from the perspective of Hugh Glass, who primarily plays the role of a sociable, patient and mentally strong character. As Fitzgerald, very well, represents the norms within our capitalist system, his perception of justice shows a key difference compared with the protagonist. As the movie especially underlines philosophical statements concerning justice and revenge shown by a broad range of different actions, gestures, intonation varieties, visual signs and other forms of expression - 'The Revenant' not only represents a fascinating piece of film, but also provides a unique way of expressing individualism through various means.