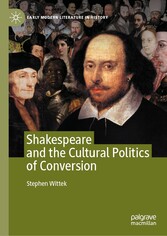 Shakespeare and the Cultural Politics of Conversion

Shakespeare and the Cultural Politics of Conversion

This book takes a close look at Shakespeare's engagement with the flurry of controversy and activity surrounding the concept of conversion in post-Reformation England. For playhouse audiences during the period, conversional thought encompassed a markedly diverse, fluid amalgamation of ideas, practices, and arguments centered on the means by which an individual could move from one category of identity to another. In an analysis that includes chapter-length readings of The Taming of the Shrew, Henry IV Part I, The Merchant of Venice, Othello, and The Tempest, the book argues that Shakespearean drama made a unique and substantive intervention in public discourse surrounding conversion, and continues to speak meaningfully about conversional experience for audiences in the present age. It will be of particular benefit to students and scholars with an interest in theatrical history, performance theory, theology, cultural studies, race studies, and gender studies.

Stephen Wittek is Assistant Professor in the Department of English at Carnegie Mellon University, USA. He is the author of The Media Players: Shakespeare, Middleton, Jonson, and the Idea of News (2015), and co-editor of two multi-authored collections: Performing Conversion: Cities, Theatre and Early Modern Transformations (2021) and Shakespeare and Virtual Reality (2021). His work has also appeared in journals including Studies in English Literature, Digital Humanities Quarterly, and Journal of Cognitive History.