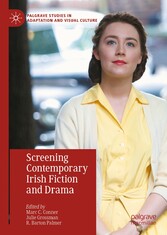 In this book, each chapter explores significant Irish texts in their literary, cultural, and historical contexts. With an introduction that establishes the multiple critical contexts for Irish cinema, literature, and their adaptive textual worlds, the volume addresses some of the most popular and important late 20th-Century and 21st Century works that have had an impact on the Irish and global cinema and literary landscape. A remarkable series of acclaimed and profitable domestic productions during the past three decades has accompanied, while chronicling, Ireland's struggle with self-identity, national consciousness, and cultural expression, such that the story of contemporary Irish cinema is in many ways the story of the young nation's growth pains and travails. Whereas Irish literature had long stood as the nation's foremost artistic achievement, it is not too much to say that film now rivals literature as Ireland's key form of cultural expression. The proliferation of successful screen versionings of Irish fiction and drama shows how intimately the contemporary Irish cinema is tied to the project of both understanding and complicating (even denying) a national identity that has undergone radical change during the past three decades. This present volume is the first to present a collective accounting of that productive synergy, which has seen so much of contemporary Irish literature transferred to the screen.