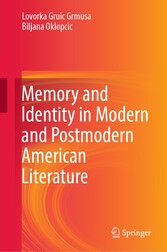 Memory and Identity in Modern and Postmodern American Literature

Memory and Identity in Modern and Postmodern American Literature

This book discusses how American literary modernism and postmodernism interconnect memory and identity and if, and how, the intertwining of memory and identity has been related to the dominant socio-cultural trends in the United States or the specific historical contexts in the world. The book's opening chapter is the interrogation of the narrator's memories of Jay Gatsby and his life in F. Scott Fitzgerald's The Great Gatsby. The second chapter shows how in William Faulkner's Light in August memory impacts the search for identities in the storylines of the characters. The third chapter discusses the correlation between memory, self, and culture in Tennessee Williams's A Streetcar Named Desire. Discussing Robert Coover's Gerald's Party, the fourth chapter reveals that memory and identity are contextualized and that cognitive processes, including memory, are grounded in the body's interaction with the environment, featuring dehumanized characters, whose identities appear as role-plays. The subsequent chapter is the analysis of how Jonathan Safran Foer's Everything Is Illuminated deals with the heritage of Holocaust memories and postmemories. The last chapter focuses on Thomas Pynchon's Against the Day, the reconstructive nature of memory, and the politics and production of identity in Southeastern Europe.

Lovorka Gruic Grmusa is Associate Professor of American literature at the Department of English, Faculty of Humanities and Social Sciences, University of Rijeka, Croatia. She is the author of The Novelistic Vision of Kurt Vonnegut (2015), and she has contributed to many literary journals and conference proceedings. Among her academic achievements, she has been awarded the Fulbright Fellowship and the Duke University Literature Program grant.

Biljana Oklopcic is Associate Professor of American literature, currently serving in the capacity of Vice-Dean for Study Programs and Lifelong Learning, at the Department of English, Faculty of Humanities and Social Sciences, University of Osijek, Croatia. She is the author of Faulkner and the Native Keystone: Reading (Beyond) the American South (2014). For her academic achievements, she has been rewarded with Fulbright, Otto Bennemann, Erasmus, and John F. Kennedy Institute Library grants.